Why do I run? Family! It’s that simple! I feel that the health and other benefits I get from running helps me bring my best self to my family and my other relationships. Family was especially front and center as I embarked on the challenge of running the New York City Marathon, November 6, 2022.

When my 29 year old nephew Steven Tulshi passed away suddenly on November 30 2016, my entire family was devasted. Steven was an energetic young man, an ex-US Marine who grew up in New Jersey, across the river from New York. I wanted to do something to help my family heal so I signed up, in Steven’s memory, to run the largest and perhaps most iconic marathon in the world! 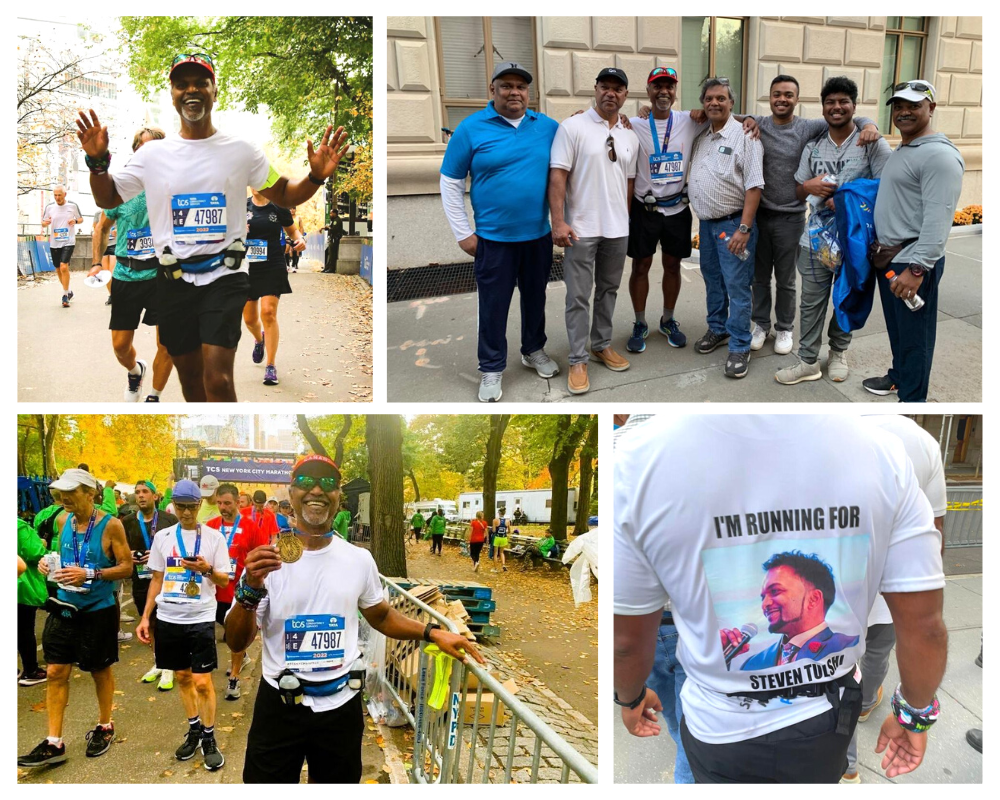 Since I decided late in the year to run, one of the few options open to me was to raise funds for a local New York charity and get a spot in the marathon in return. Having completed 5 marathons including Toronto, Niagara Falls International and Chicago, I have some experience running marathons under my belt. However, nothing could have prepared me for November 6th, 2022 in the Big Apple!

Starting in Staten Island at the foot of the world-famous Verrazano Narrows Bridge, the TCS New York City Marathon course runs 26.2 miles or 42.2 km through the five boroughs of NYC. After a 3-month long training program, the big day arrived. At the start line, me and an estimated 50,000 other marathoners from seemingly every corner of the globe waited to start. The temperature was way above seasonal; at 25 degrees Celsius, it was less than ideal marathon conditions. I was nervous and excited, and the anticipation was palpable as the US national anthem was sung and bang, we were off!

In most marathons, spectators gather at the start, finish and at the ½ way mark. In NYC, spectators lined the entire 26 miles, cheering the runners on, holding up motivational signs, playing music and handing out water and even beer! It was one big party and the entire city showed up - what a sight!

As with many marathons, the last 6 miles is the most challenging as the runner’s energy stores are depleted and then it becomes a mind over matter battle. Steven’s memory kept me going! It was one of my most challenging marathons perhaps because of the tough weather conditions and course elevation.

The race finished in beautiful Central Park in Manhattan where my three brothers and other family members were waiting for me. While I did not meet my goal time, I believe I achieved my goal of keeping Steven’s memory alive and helping my family heal.

American actress Blake Lively famously said: “New York has romanced me unlike anything else.” How very true, thank you New York!

Jeet Tulshi, PMP, CRSP is a Senior Service Director at Liberty Mutual Canada and teaches Occupational Health and Safety at Humber College in Toronto. He volunteers with the BCRSP and often speaks at safety events throughout Canada.

and stay up to date on BCRSP news, event and more!