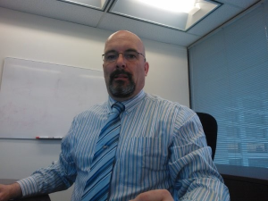 Initially, I had no intention of becoming a CRSP. At the time, and for my own reasons, I simply didn’t see the organization as being the type of professional organization I wanted to be a part of. In recent years however, the BCRSP has strengthened the requirements to become a CRSP and in so doing, has become a truly ‘professional’ organization. With that in mind, I decided to pursue the certification.

I had close to 15 years in occupational health and safety prior to becoming a CRSP. During the course of those years, I had taken a multitude of training programs from incident claims management to safety program development. While this was all good training, none of the programs taken provided me with ‘stand alone’ certification. Considering this, I enrolled in my university program to bring it all together. A CRSP designation then became the next step.

I became aware of the CRSP designation long ago through industry networking, and I have been a CRSP for a year.

There are two bits of advice that I would like to offer new/prospective CRSP’s. The first would be to never stop learning. The CRSP designation is not to indicate that you know it all, but to indicate that you have the appropriate understanding and commitment to learn more! Secondly, don’t ever stop being a critical thinker. Being a critical thinker means that you want to understand the complexities of every issue and not just be a LinkedIn star who can pass judgement and provide answers based on a photo!