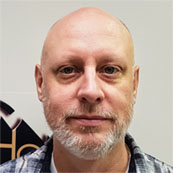 After 20 years of working globally in the oil and gas industry, new CRSP Nic Aulmann is in the process of moving from Calgary to Medicine Hat, Alberta. He is starting a new career as the Personal Safety & Industrial Hygiene Officer Advisor for CF Industries, which is a global leader in transforming natural gas into nitrogen.

Originally from Australia, Nic has an extensive background in occupational health and safety that began when he was a Naval Officer in the Royal Australian Navy. During his time there, he didn’t witness positive safety practices and his original plan was to move into maritime safety to help address these issues. Unfortunately, when Nic transitioned out of the navy to a civilian job, employers didn’t look favourable on his navy experiences, so he enrolled in university to become a Registered Nurse. As an RN, Nic began his career in oil and gas working in occupational health and hygiene for various companies around the world.

In 2014, Nic was sponsored to come to Canada to work as a HSSE & CR Manager for a Calgary-based oil and gas company. With the economic downturn in the oil and gas industry, Nic lost his job and discovered that it was tough to find a new position because he didn’t have a lot of experience working in Canada. Companies did not look at his previous international experience the same way they did of someone who had been working in Canada for a longer period.

Last year, he read that the BCRSP had signed a Memorandum of Understanding with SIA, so he decided to pursue his CRSP® certification. He knew he would have a better chance in getting a job with his CRSP® because that was the level of experience that companies he had applied to were looking for. Nic successfully achieved his certification in late 2018, which will help him as he begins his new career with CF Industries.

Nic is proud to be a CRSP® and believes that everyone should hold a professional certification when working in safety.

Nic states that “by having more peer support amongst OHS professionals, it will help to strengthen our industry and enable us to work together better.”

Nic hopes that the CRSP® certification will continue to gain recognition and importance, and the MOU with SIA was one step towards this by creating more opportunities for OHS professionals to have their credentials recognized globally.

BCRSP signed an MOU with the Safety Institute of Australia (SIA) in 2018. The MOU recognized COHSProf and ChOHSP certifications for streamlined entry into the CRSP process. For more information on the BCRSP/SIA MOU click here,