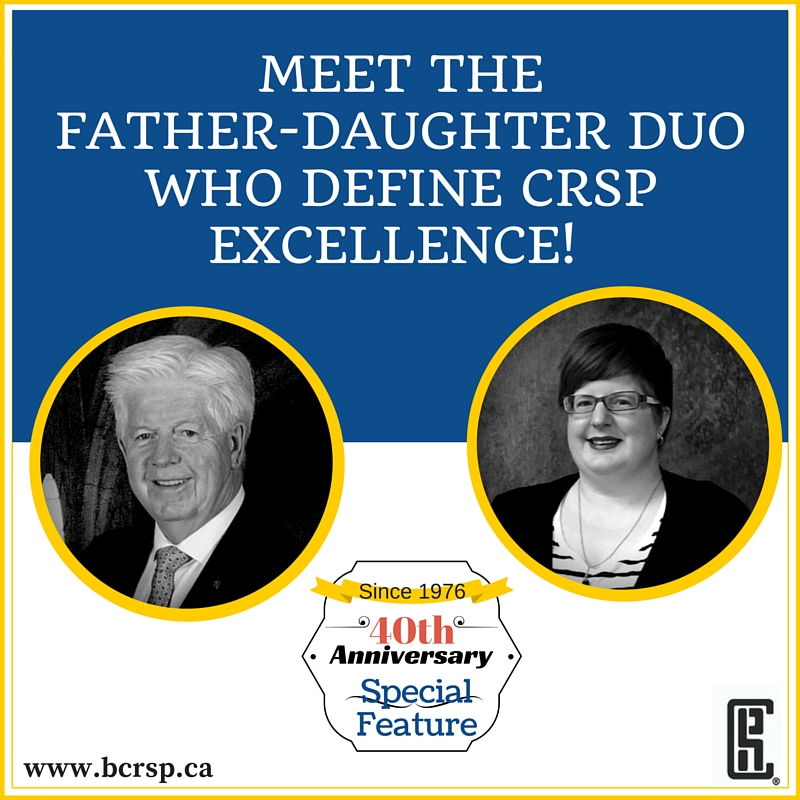 This is part of a series of articles that are being published throughout 2016 in commemoration of the BCRSP’s 40th Anniversary Celebration, 1976-2016.

Attaining the CRSP® designation was the first step in building a legacy for CRSPs Dennis and Shannon Bolger; the father and daughter dream team behind Benchmark Safety.

Benchmark Safety Inc. is a small Calgary-based company that provides a wide variety of safety management support services to clients in the oil and gas, construction, recreational and manufacturing sectors in Western Canada.

While there are over 4000 CRSPs® across Canada, the US and overseas there are very few generational CRSPs. The Bolgers are a rare father-daughter duo and have built their company on the foundation of family, safety and of course, CRSP® excellence.

This father-daughter twosome have many similarities, including safety originally not being on their radar as a career. Passion and purpose drove them both, at different times, to pursue it.

Dennis, who’s been working in occupational health and safety for over 32 years, began his career in engineering and operations at Shell Canada. After taking a short term assignment, he ended up enjoying safety so much that he welcomed the new opportunity.

“I liked the challenge I got from safety, and the opportunity to work with people on a level where I actually saw the impact I was making,” says Dennis.

With 15 years under his belt at Shell, Dennis began his own consulting company in 1996 in hopes of helping more companies and that's when he realized he needed the CRSP® designation.

“People are looking for credentials when hiring consultants, they want to know that you know what you’re doing and in Canada the designation they look for is the CRSP®,” says Dennis.

You might say that Shannon’s career in safety began when she was very young as Dennis began unintentionally grooming her for the industry.

“I grew up knowing about hazard assessments and risk assessments,” recalls Shannon. “Dad used to practice his presentations at home and my sister and I were the audience.”

When Shannon graduated she wanted a career in environmental studies but instead agreed to take a year contract with her dad in hopes of eventually branching out. That was 15 years ago.

Now Shannon runs the company her father established, following closely in his footsteps in many ways, and also making new ones.

Shannon got her CRSP® designation in 2009, the last year Dennis was on the BCRSP Governing Board [Dennis served on the Board from 2006-2009]. Although he knew weeks before she did that she passed the exam he kept the secret; making her anxiously wait like all the other candidates.

“I was so very proud of her because I know firsthand how difficult it is to get the designation, but at the same time, it opens so many doors.”

Now the pair works side by side each bringing a different dynamic to the business and their plethora of clients.

“We work very well as a team,” says Shannon. “Dad brings a vast amount of knowledge to the company from his rich background in oil/gas and construction and the way he treats people is amazing.”

That same knowledge is what has helped Shannon in her career.

“People often react very differently to each of us,” says Shannon. “But having him (Dennis) as a mentor has been extremely rewarding. Being a young woman in this business has added a layer of difficulty but I’m able to bounce things off of him and he does the same with me.”

Her advice to women beginning in safety: “have a mentor and make contacts; because it’s essential to have someone in your corner.”

After nearly 20 years in business, Benchmark Safety now works with over 150 companies and have created quite an impact on their clients.

“I recently took over the everyday business from my dad and it’s amazing to see first-hand how highly clients speak of dad and the business,” says Shannon. “It makes me very proud.”

Not only are they both CRSP®s but they only hire consultants who have the CRSP® designation.

“It’s a minimum requirement for anyone we hire,” says Shannon. “We’ve tried to hire professionals without the designation and the quality of work was not where we needed it to be. You have to have certain skill sets to be a consultant and the designation helps with that.”

The business continues to thrive and both Shannon and Dennis have their eye on Shannon’s 2-year-old nephew who might just be the next CRSP® to take over the family business.